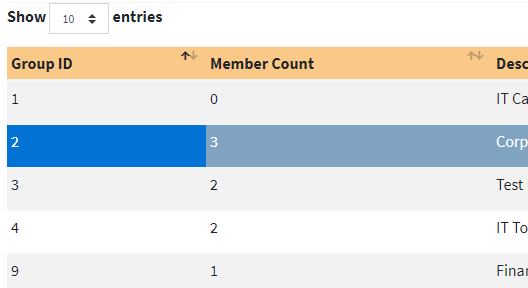 As you can see from the attached screenshots - for reasons I'm not entirely able to discern - the first column in my table gets colored differently from the remainder of the columns where a custom styling 'background color' has been specified in user CSS. It seems like one of the JS objects involved is ignoring my custom CSS overide... but only on the first column.

Although I can't say this with complete certainty having a very falible memory, it seems that this issue has only appeared in some of the more recent builds. The app in dev which the screenshots were pulled from was coloring selected rows consistently on all columns until about build 1.10.18 when the problem appeared. I don't recall making alterations to the underlying code that would otherwise explain this cropping up.

Regretably I cannot stand this particular example up on publicly accessible page, but I think the screenshots illustrate what is happening with sufficient clarity.

Any advice on possible causes would be greatly appreciated.